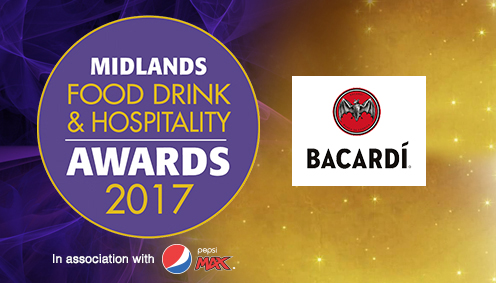 Bringing the drinks to the table, Bacardi have signed on as our drinking sponsor for the highly anticipated Midlands Food, Drink & Hospitality Awards (MFDHA) 2017.

World renowned as being one of the largest and most celebrated family owned spirits company, Bacardi are recognised for having a global presence as well as numerous coveted awards.

Not just known for good quality alcohol, the Bacardi family are celebrated for bringing spirit everywhere they go. Conquering the world for over 150 years, the secretly blended Bacardi has been the same tasting rum that’s been passed on from generation to generation, with the legacy still continuing.

The MFDH awards was formally known as the Birmingham Food Drink & Hospitality Awards, however due to such popular and intense demand from vendors far and wide outside of Birmingham, we decided to expand the BFDH to take the entire Midlands area into account. Now, the MFDH aims to recognise and reward all the very best names and faces in food, drink and hospitality, from restaurants to bars to cafes and more.

Pepsi Max is the headline sponsors for the prestigious event. Supported by Birmingham City University, Pathway Group and NFU Mutual.

The MFDH will be taking place on the 26th June at the Edgbaston Stadium.

Don’t forget nominations are open so if you would like to nominate yourself or know of someone else that deserves to be nominated, you can do by clicking here